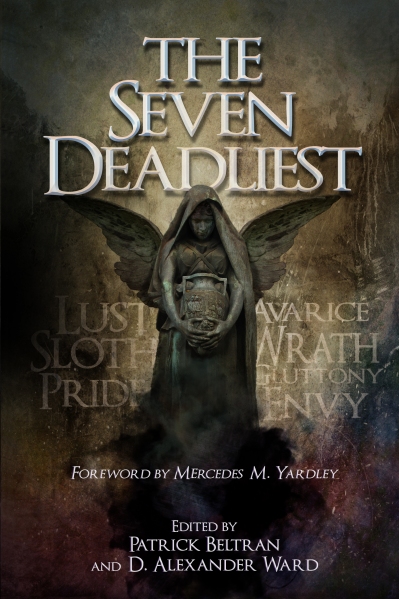 I’m thrilled to announce my novelette, “Ring of Fire,” has made the preliminary ballot for the Bram Stoker Award in the Long Fiction category.

This was one of the most difficult stories I’ve ever written. I knew going in that pairing horror and lust was going to be difficult—not echoing Hellraiser, avoiding anything that came across as misogynistic, as I didn’t want to alienate the reader. I was inspired by Annihilation by Jeff VanderMeer, as well as The Warren, by Brian Evenson, and a few movies at A24 I don’t want to mention, to avoid spoiling it. I also knew that I wanted the ending to be optimistic, but the entire epilogue was a surprise.

Here are a few kind words that reviewers had to say about the work:

“’Ring of Fire’ by Richard Thomas—which tackles ‘lust’—is by far my favorite story in this collection and, in my opinion, the most skillfully rendered. First of all, like all the other stories, Thomas doesn’t give us a clichéd horror story about someone’s sexual urges leading them to a grisly death. However, this is Richard Thomas we’re talking about. I knew he wouldn’t lean on cliches going in. Instead, he tackles the intersection of loneliness, guilt, shame, grief, the desire for companionship, and, yes—sexuality. But sexuality through the lens of longing for companionship, for physical comfort and belonging, for intimate connection. I’m not going to say anything else about this story, except that lots of folks claim to write “science fiction/horror” blends, but few get it right. Thomas gets it extremely right in this.”
—Cemetery Dance

“‘Ring of Fire’ is undoubtedly the most ‘horror’ of all the stories in this anthology, an unsettling pot-boiler that seethes with atmosphere and dread. Following a lone researcher at a facility in some unknown snowy location, Richard Thomas is the master of withholding information and creating mystery. It is always as much about what we do not know than what we know; what he refuses to say, as what he says. Our narrator for this story is straight-up unreliable, and the world around them is unreliable too. As we progress, however, and notice these disturbing deja vu moments, these chimes of coincidence, we begin to piece together the deeper narrative of what is happening…Richard Thomas plays with us, and our expectations, capturing the kind of paranoia of Blade Runner and mixing it with the existential dread of 2001: A Space Odyssey. There are sci-fi elements here, but they are subtle; our narrator seems to barely grasp them, describing his processes and encounters with unease and uncertainty, the vocabulary of a man at his wit’s end. This story is about lust, yet Richard makes sex conspicuous by absence, all the while amping up the pressure-cooker of sexual tension until we are, like our protagonist isolated in a lone facility, about to implode.
—STORGY